In professional gastronomy, we often come across a professional kitchen facility called a combi oven. This kitchen equipment allows healthy cooking. Thanks to their own setting of parameters and the choice of humid or dry air, the dishes are juicier and retain their original nutritional nutrition. The combi oven offers many ways of cooking food such as cooking, pre-cooking, steaming, stewing, baking, baking, low-temperature or slow baking, sous-vide, confit, smoking, drying, grilling, grilling, roasting, frying, poaching, blanching, regeneration, sterilization or shock cooling.

Game is a designation for meat of animals that have been caught in the wild. The meat has a reddish-brown color, is firmer and more aromatic. It has a characteristic taste, a high protein content and a lower fat content compared to other types of meat. Venison meat is a nutritious, dietary and easily digestible species. It contains large amounts of vitamin B and minerals such as potassium, sodium, phosphorus and iron. We divide game into tall - roe deer, deer, fallow deer; low - hare, wild rabbit; black - boar; red - mouflon, chamois and feathered - wild birds. The game also includes exotic animals such as ostrich, kangaroo or antelope.

Venison meat has its typical taste and aroma, so it is necessary to thoroughly process and prepare it before final treatment. Salt, garlic or venison spice is suitable, which consists of salt (45%), ground sweet pepper, bay leaf, black pepper, oregano, fresh spices. In addition, the flavoring substance E621 is added. Meat loading is an integral part of the whole preparation process for game. It is often recommended to load the meat into the marinade for a few days. Thanks to this process, the meat softens and is then softer, more tender and juicy. Marinade is generally an infusion prepared from vinegar, oil, wine, root vegetables and various spices. From the game we can prepare carpaccio, pâtés or choose the method "á la cacciatore". It is an Italian term meaning "hunting style" or "hunting". This term refers to a dish prepared from game by hunting style - with mushrooms, onions, tomatoes, herbs and a small amount of wine. Game is often prepared by slow baking in baking foil. Dip, cranberry sauce or other "sauce" goes well with the finished meat. 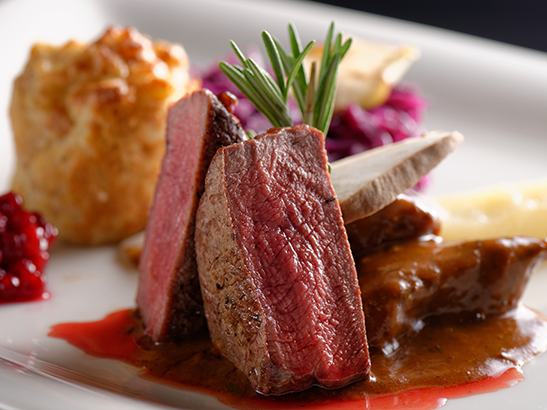