In professional gastronomy, the combi oven is often used to prepare meals, which is a professional kitchen equipment. Thanks to its properties and setting options, it is great for preparing all kinds of meat, vegetables, side dishes and even desserts. The combi oven offers many ways of cooking food such as cooking, pre-cooking, steaming, stewing, baking, baking, low-temperature or slow baking, sous-vide, confit, smoking, drying, grilling, grilling, roasting, frying, poaching, blanching, regeneration, sterilization or shock cooling.

Mexican cuisine is not just nachos, hot jalapeños and tequila. Mexican cuisine is influenced by a thousand-year-old tradition of indigenous peoples and European gastronomy. Vegetables such as avocados, tomatoes, chili peppers as well as beans, corn or cocoa were well established in Mexican cuisine before the colonial period. Pork, rice and wheat traveled from Europe to Europe. Tortilla pancakes are an essential element of Mexican cuisine, used to prepare burritos, tacos, quesadillas or nachos. Tex-Mex is a term for Texas-Mexican cuisine, which must not lack chili peppers, sour cream, rice or beans.

Tortillas - pancakes, which are the basis of many Mexican dishes and their preparation has not changed in a thousand years. These pancakes are used as a side dish or are part of a typical Mexican food takos. Takos are shaped tortillas that are served as a sandwich. Fried tortillas are served as tostadas. Canapes made of nachos are prepared as a form of small snack. A spoonful of spicy guacamole or hummus sauce is topped with tortilla chips and sprinkled with ground red pepper. Guacamole is an avocado mixture with tomatoes, lemon juice, sprinkled with coriander. Salsa is a thick sauce of tomatoes, onions, spices and chili. It is served as a supplement to tortillas. Achi is a liquid spice extract that is used to flavor salads in Mexico. Chilli con carne has been a favorite dish of Mexicans and Texans since the Wild West. The recipe is based on ground beef, beans, tomatoes and onions. Tequilla is a strong distillate made from pulgue or mazcal, which are different types of agave. 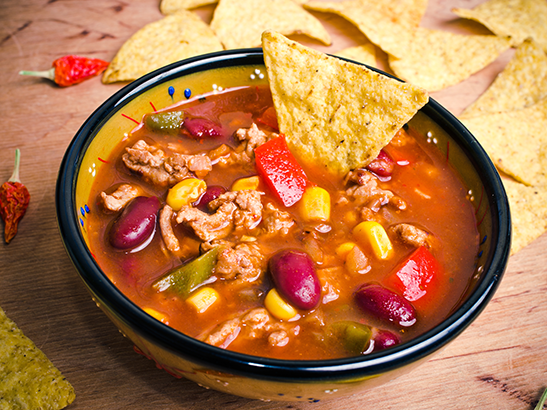